Thank you for looking at my blog!

I’m a photographer, mini-filmmaker, speaker, surfer, skater, and about to publish a children’s book! I’m now in my second decade (gulp!) of  #Being-PALL #PlasticALotLess both living and inspiring preventing plastic pollution at source, long before it was trendy!

I learnt about Plastic Pollution during a beach clean when I lived in Portugal. (full story below) I started refusing sinlge-use plastic the next day. Although I continued to arrange dozens of cleans, I learnt from looking around – the only way to stop plastic washing up is to prevent it – at source. And that is what I’ve been doing ever since … 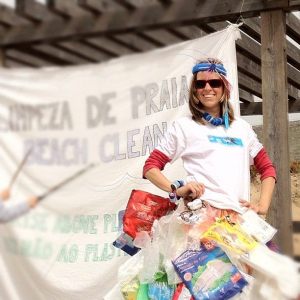 Why the term #BeingPALL? Plastic-Free has never resonated with me, because, well I’m not! I write on my plastic computer, all be it a second hand. I refuse single use plastic every day, in the first three years I’d refused over 10,000 plastic items, I’ve continued for a decade, but plastic-free? No. How in this day and age can we be? By living in a cave with no wi-fi?! I’m not prepared to do that (not yet anyway!).

Plastic-Free feels like a well meaning diet. It all goes very well at first, then becomes overwhelming and before you know it, you’re back on the (plastic wrapped) pies! #BeingPALL is sustainable, guilt free and a work in progress.

In 2015 I moved to Bristol, my aim being to prevent plastic pollution at source full time. In January 2016 Natalie Fee invited me to be Creative Director at the now, multi-award winning City to Sea. So I’ve been a bit quiet over here, but we’re busy over there!

I’ve made videos that have gone viral and images I’ve taken have been used in many press articles to highlight our campaigns, I’ve gone from never speaking in public to a confident speaker with reviews that have surprised me! Hosting events and award winning films, sitting on a toilet with my knickers around my ankles in public, being a Mermaid with a Message – to name a few!

And now? I’m currently running a Crowdfunder for my new highly acclaimed book!

Maybe one day I’ll learn to manage both, but for now I like to look up in my spare time; chat to people, surf, hike, dance and cook. (And move house it seems, though I don’t actually enjoy five moves in a year such as 2018!)

Before 2008 I was pretty ‘normal’ in the plastic side of things.  I bought a lot of plastics. Water in plastic, lazy soups, filled pasta, microwave meals for work, bags upon bags under the sink, bathroom full of plastics, drinking straws. I used plastic cups and plates when ever they were given to me. You know, the usual story.

I recycled, before it was as common as it is now.

Well, actually what I did was separate my plastics, and put them out side the front door in a separate box. Never thinking what happened to them. Assuming, it was the best thing to do with plastic…

One day a few of us went to a deserted beach, close to where I was living on the West Coast of Portugal.

It was after the season, my first one having been there just a few months. The idea was to collect toilet roll campers had left. We went for the old man, who had lived on that beach all his life.  The rain had beat us to it and washed the toilet paper away. Instead, we found plastic.  Sacks of it. We took it to the recycling bins, most I didn´t even know was plastic.    That evening in The Surfers Path I found a small article that simply said:

“Every piece of plastic that has ever been made still exists and much of it is in our oceans.”

There was a you tube link to; A Tale of Entanglement. Which is a pretty graphic film of animals entangled in plastic. I was upset and looked around the camper… at all our plastics.  The next day I started refusing and researching.

As a photographer and surfer.  I started shooting surfschools. This meant I was spending a lot of time on the beaches.

With the Atlantic swell, it´s hard not to notice the ever-changing plastic washing up on the beaches.  Especially when I was shooting, over the many years that followed, even in Summer swells plastic washed up around my feet every day.  I was constantly reminded of the presence of plastic pollution, so I couldn´t help but do something positive about it.

Firstly be reducing my own plastic drastically, and then helping others reduce theirs.

Although I´m still come up upon obstacles, I try my best to over come the challenges as refusing plastics is a way of life for me now. I don´t claim to be perfect, there´s always more anyone can do, but PALL-ing´s a good place to start.

I hope this blog can help you to PALL – Plastic A Lot Less –  your lifestyle. Please get in touch, especially if I´ve helped you out, I´d love to hear from you!

Wondering why it took Six years Being PALL before blogging? Read my first post here.

8 thoughts on “About Michelle”