I thought I´d post a couple of recipes, and tips of how to PALL them. Seeing as eating generates possible more single use plastic than most areas of our lives, simple because we eat three times a day.

These Banana Flapjacks, which I managed to not only make, I made with zero plastic. Cool hey!

If you´re new to PALL-ing you may be wondering how to shop without all the layers of single use plastic, so I´m keeping this post to shopping.

I did blog tips how to shop while I was in Singapore last year Singapore shopping, with a huge gallery of pictures. Also for Olive Oil and bread. This post will be how to shop for ingredients, to actually make a meal!

This is from shopping around Bristol. Though could be relevant for many places.

Being PALL does require a different shopping technique.  If I popped in a supermarket – in England – this is simply not going to happen. Though in France when I was there a couple of years ago I could. If I were in Portugal I´d be able to get most ingredients for this from a Farmers Market.

I´m in Bristol, so have shopped at Scoop Away, Southville Deli for the dry ingredients and Matter Wholefoods for the fresh. (I could have got away without the deli & done it in 2 shops but it´s closer for the heavy items such as the oats.) As for the fresh, there are literally green grocers in Bristol everywhere. We are very lucky to have so much choice close to hand! 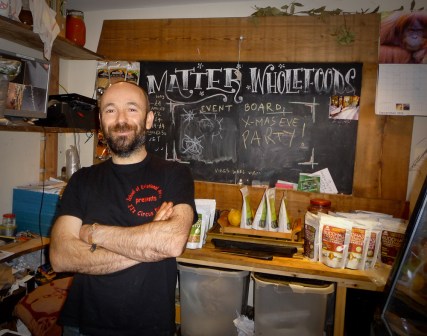 I shop in bulk.  By buying far more than I need of dry goods, I don´t have to go shopping so much. Making PALL-ing easier.

For me, when I started shopping like this I found the benefits far out weighed going in a supermarket.

For fruit and veg I choose the loose produce.  Yes, this does sometimes mean I don´t get what I want!  But generally I do, so I just jiggle recipes around to change ingredients. I really don´t miss out that much. 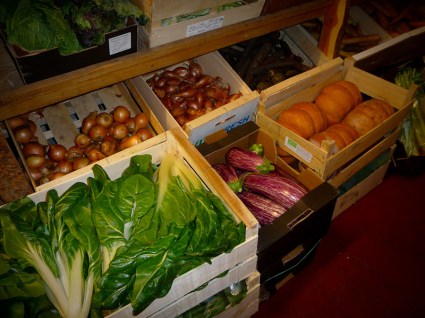 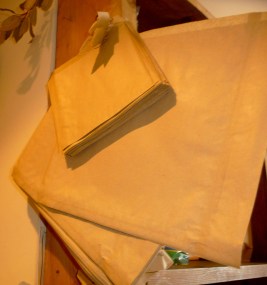 I´m lucky. At my greengrocer Matter Wholefoods they also do fresh juice. So I have one of those while I shop. In a glass! They know now I want a glass, I don´t have to ask, rather than a plastic lined cup… They are open until 7.30 pm! & on Sundays.

Canvas bag in to bike pannier

I put all my shopping in canvas bags which I then put on my panniers. Or carry!  (The panniers have loads of plastic, and are made of plastic. But I found them a charity shop so I let them off…)

For dry loose goods one of the places I go is Southville Deli. Open till 6.30 pm 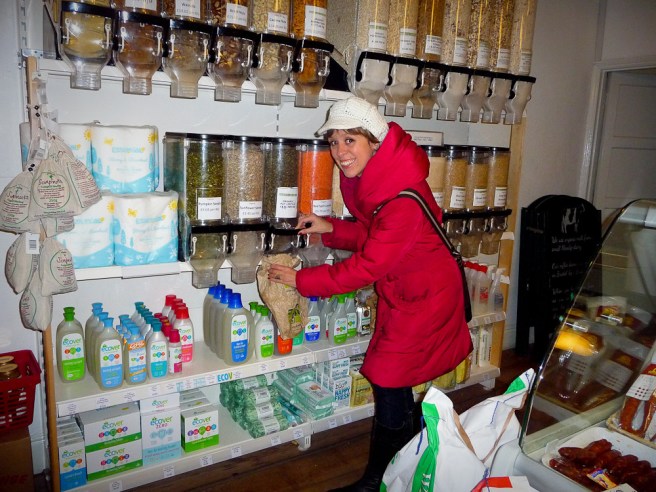 It´s a bit of a PALL paradise. There were many reasons I moved to Bristol!

Sorry for those of you not in Bristol…  But for you´s that are, now you know! Get yourself down there, you´re gunna love it!

I use paper bags (ask, they have them for bread) or I use my tins I get at charity shops. I love a tin as they´re light and easy to transport. 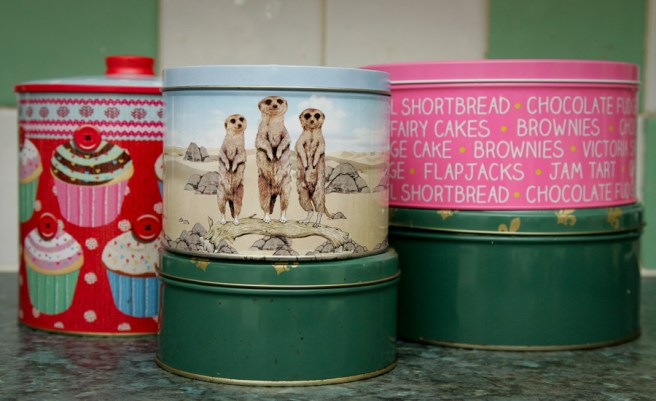 Another place I shop is Scoop Away. Only open till 5.30pm though, so for people with day jobs you need to get down there quick! Or on a Saturday.

At Scoop Away I need to be extra prepared they have no alternative to plastic bags in the shop (the tiny paper ones are good for spices, dried fruit etc, but not the things I want to get in larger quantities.)

So I refuse the plastic bags, and put every thing straight in my tins. Or their little paper bags. I´d spend way more if they had big paper bags, so maybe they´re doing me a favour! 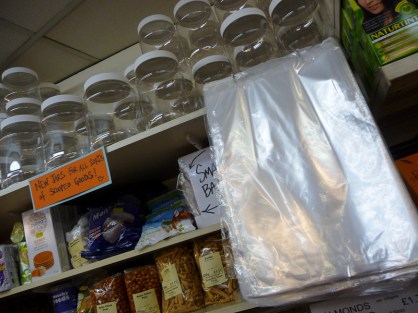 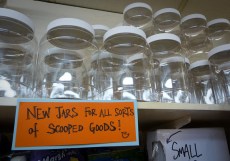 New jars are plastic though, so best to BYO 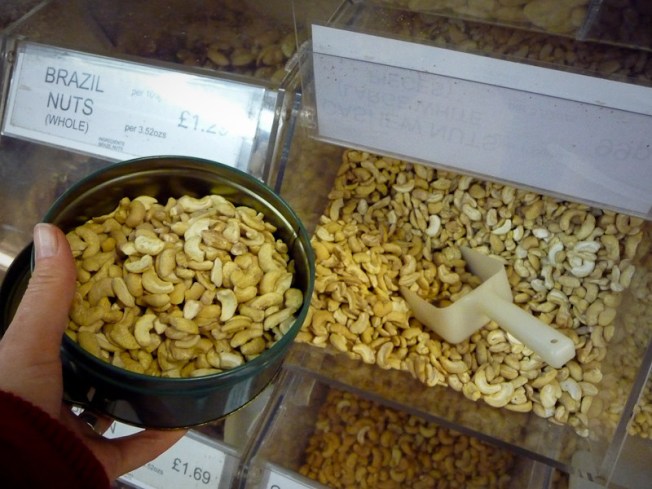 Scoop Away stock it all. Literally. You name it, they have it! It´s one of the best places to shop PALL I´ve ever been!  and it´s here, on my door step. 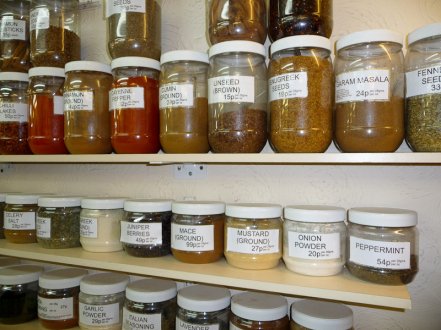 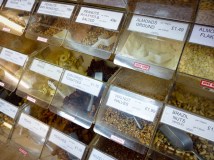 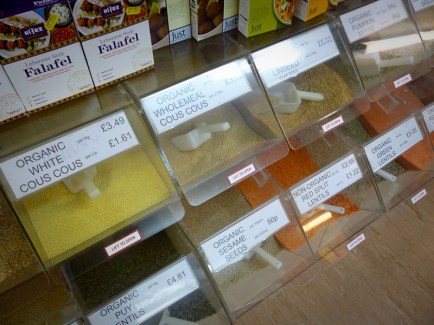 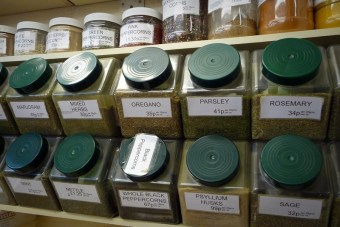 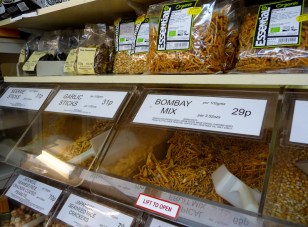 My house mate bought one of these large funnels for pickles she makes. It comes in very handy to transfer my stuff into jars.

Glass needs to be kept in a cupboard rather than on the shelf ideally. Goods don´t like too much sun light I´m told.(Though not too much fear of that in Bristol at the moment!)

Sometimes I do come back with more paper bags than I´d like. (As in today for example!) In which case I re-use them and then use them for compost. I need to find more tins!

These are just a few examples.  Let me know of other places in the UK and we can add them to the Plastic Free Directory.

I can´t take credit for the recipe. This is the link for the original,  Banana Flapjacks. Enjoy! 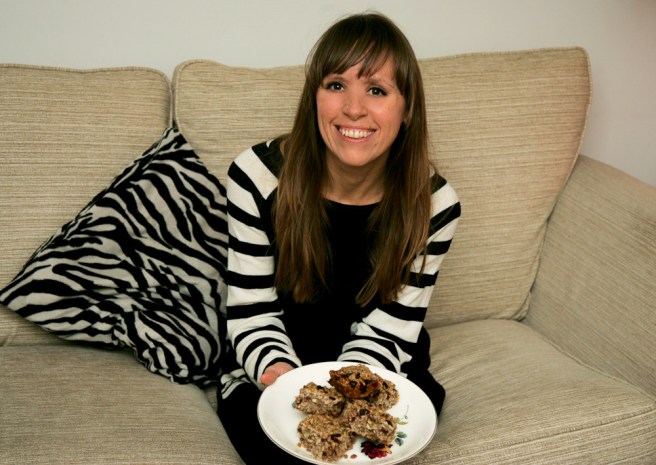 Good luck! And remember, every refusal adds up!