Through the magical adventures of daring Seb, children learn about the effects of plastic pollution, and more importantly it enlightens them to simple and practical ideas on how they can PALL to help prevent it. So they can implement these simple solutions in their daily lives – and that of their carers.

With an emphatic, strong female superhero character (plus narwhals, a leatherback turtle and albatrosses!) showing Seb the way, she’s taught how to overcome the challenges she faces and learns the difference she is making. 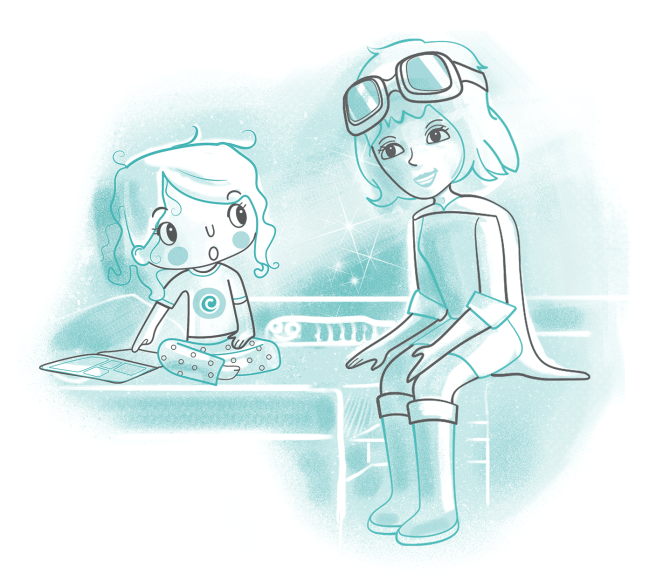 Sighing, Seb said, “I’m just one little girl, what difference can I make?”

Ahhh but you can make a difference Seb,” said Polly, “I’m going to show you how to PALL.”

All of the updates are currently on Seb and Polly Planet’s new facebook page here which is the main platform.

Since Blue Planet Two in 2018, plastic pollution has been making headlines. This issue can feel overwhelming, even to adults, but it’s becoming clear we urgently need to change our habits to make a difference.

It’s already had fantastic reviews from children and organisations within the field. The final text has been worked on with a copywriter, children’s editor and with input from teachers.

Everyone needs a superhero, grownups and children alike, and as a scientist and advocate for ocean conservation, I can assure you I have my own superheroes I look up to.  Seb and Polly Planet were a pleasure to share with my own hero, my 6 yr. old daughter, who was enthralled with Polly Planet, nodding in agreement with every fact in this book about plastic pollution (she is the daughter of scientist). Michelle Cassar weaves a fun, fact-filled narrative that leaves children with a deeper understanding  of what it will take to turn around the plastic pollution crisis we face today, leaving the reader with a little more hope than they may have started with.

Marcus Eriksen is an environmental scientist, educator and author.
Co-founder of the 5 Gyres Institute, and co-founder of LEAP LAB.

This book was inspired by Scarlett, the (then) six year old daughter of a friend’s, who Michelle spent six months living with in Singapore in 2014/15 having herself at that point already been living and inspiring #BeingPALL for six years.

Scarlett was the seed of the idea that became the colourful character of Seb, as she inspired Michelle with her positive, brave, can-do attitude towards reducing plastics (and palm oil) in her own life.

Standing up, Seb felt determined. With her hands on her hips and screwing up her face with a look of disgust, she said out loud, “Foolish grown-ups! Starting today I’m going to PALL!”

Michelle was then teaching children at Tanglin Trust School in Singapore about plastic pollution, and seeing how they just got on with refusing plastics once they had learnt to PALL encouraged Michelle to keep going.

The idea of a book featuring a smart little girl with big ideas and marine animals visiting her came while watching a tropical storm brew, so Michelle began scribbling it down on some scrap paper and the next day banged out the very first draft, with all the characters and storyline in place. Nicole, an early-years teacher and Head of Science at Tanglin Trust, described the first effort as ‘a shopping list’, but Michelle was not deterred and kept working on it, with plenty of input from six-year old Scarlett and her older sister Poppy!

The book is to be crowdfunded on Crowdfunder UK.

Please click your preferred channel below so you can see the updates and it’s easy to share:

All of the updates are currently on Seb and Polly Planet’s new facebook page here which is the main platform.

Seb and Polly Planet is illustrated by professional illustrator Eve Bourrat working under the name Creat’eve illustration, based in beautiful Falmouth in Cornwall.

Find out more about Eve and the book with